Shed of the year 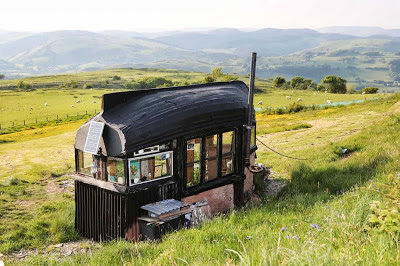 I see that a hand-built cabin in the Cambrian Mountains has won Cuprinol's Shed of the Year. A prize of £1000 attracted hundreds of entrants - and about a million quid's worth of free publicity for Cuprinol. I bet their marketing team is delighted.

Depending on your definition, I have at least two sheds and possibly three. The difficulty comes in whether our outhouse is truly a shed or just a room for the boiler. But let's not get all philosophic  - for the purposes of this blog we can agree that I have two, and I'll declare my working definition as being that a shed should have room to sit, read book and make a cup of tea. The ideal one would also have a sofa or bed, capable of accommodating at least a mid afternoon snooze.

In my case, the attraction is part nostalgic. My grandfather had a gimcrack cabin he would retire to after his daily trip to the Legion. It smelled of beer and leeks and had net curtains and a tripod table with a lace tablecloth. The walls were covered in our childhood drawings which in some cases he'd framed, though he was as good as blind.

There's also a need for space - 'thinking' a much as 'physical' - which some would argue is a reflection of our homes and lifestyles. But in fact, the idea of a creative haven has a long tradition, as well as practical application in so far as it allows for materials to be readily available and projects easily returned too.  My recent playing of the saxophone gives this a new twist - I'm regularly banished to give the family some peace, rather than the other way round!

I've often wondered about the benefit of installing sheds at the office - it's an attractive idea, but doomed to failure. In no time they'd be demarcated; there'd be rules and regulations, an on-line booking system, plasma screens and tea and coffee on demand - they'd be a pastiche of the real thing, a veneer for the ego; out of touch with the original purpose.

Not that there is some deep meaning or meta-purpose in the sheds themselves - that too would be bollocks. They are simply a means to fun, to reconnecting, to winding down, to time alone - or in my case, to time with Dylan - twice this week we've had a 'shed-night': watched a movie, had some snacks, read stories and woken up to the dawn chorus - precious times. What's that phrase... can never come again? 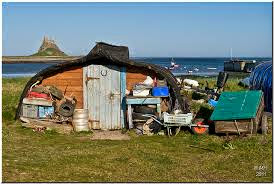 But if times can't come again; ideas are constantly recycled. I couldn't help noticing the shed of the year's resemblance to the upturned boats on Lindisfarne. They have been there, icons of time and place, for more than a century - the oldest dates from 1902. Believe it or not, they're now in the care of the National Trust - so much for the humble cabin.

And not a drop of Cuprinol in sight.

Tied hands - and the value of time 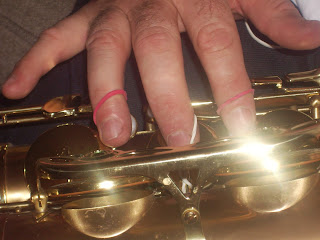 It's been eight weeks since I wrote on this blog; the longest break for years. Not that I've been idle; rather my hands have been tied - quite literally at times.  And I've been thinking too, about the value of time.

All my adult life I've longed to play the saxophone. The wish began in Park View Records - a tiny jazz store that just happened to be on my route home from school. The owner didn't much care if you bought anything - so I'd hang around listening to the latest releases from Verve and Blue Note. At a time when my mates were drooling over Debbie Harry and Kate Bush, I was reading cover notes on Stan Getz and Ben Webster. I still reckon I got that right.

And yet, despite my wish, and always a love of jazz - I never quite had the nerve to buy one.  Somehow, actually playing wasn't for me, and especially so the sax - it was too cool, too loud; too much of a statement. And in any case, I was crap at music - or at least I had been at school. What's more, I didn't understand it; chords and scales and tempos were a mystery - scary even.

I told myself I could paint and draw - and resolved to be happy with that. Later I'd learn to climb and kayak - later still to be a writer. But as for playing the saxophone, that would remain an unfulfilled dream...

I'm not sure what changed my mind.

My faltering progress on the banjo (a basic competence after three years of struggle) didn't hint at a latent talent. I turned fifty some years ago, so it wasn't even a rash present for the big 'five-zero'.  There was no bet involved, no sponsorship, no dare; the truth is, I hadn't thought about playing the sax for years.

So when I happened by chance to pass through London's Tin Pan Alley I wasn't expecting to say, why the hell not?  Even less was I expecting that after ten minutes sales chat I'd be lugging home a big old tenor, and a good one at that - in for penny (quite a lot of pennies actually); in for darn old racket. 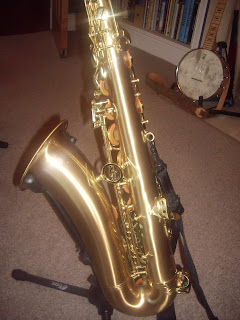 And I love it.

It took a certain nerve, and a very thick skin - for your neighbours won't love you at first - to make those first few squeals notes. But in a matter of days the familiar obsessional drive began to kick in. I could feel it taking hold: awake at night thinking of scales; drumming my fingers in imaginary patterns; not bothering to write! If proof were needed, the other week I devised a system of elastic bands to hold my fingers closer to the keys.

My only regret is that I waited so long. I feel a need to make up for lost time. In my more wistful moments I imagine how good I'd have been - and the pleasure I'd have had - if only I'd bought one at eighteen.

In a sense that last thought is pointless as well as hypothetical - for there is nothing I can do about it. And yet it harbours a deep truth about the value of time.

We all know that time can't be bought.

When economists try to capture its value they succeed only in part. Figures show that in real terms  £10,000 is worth 30% less than eight years ago - in four more, it's value will have halved. But this approach can't possibly capture the true loss - for even if we account for inflation, and add in a risk premium or a super-bonus just for the heck of it - what of the missed opportunity, the pleasures that could have been; the joy and memories forgone?

We intuitively know this. It's why we borrow at times - because the benefit of consumption today is so much greater than waiting for a tomorrow that might never come. We extend our mortgages because we need a bigger home when the children are small, not when they're off to college. And we know too that some opportunities come once in a lifetime.

And yet, so often we put off the things that cost very little.  When I said my saxophone was a lot of pennies, in truth, it wasn't much more than a few fills of petrol. It's the effort it takes that is the real inhibitor.  I know I'll never be much of a jazz musician and in a way that makes me sad - but less so than the prospect of dying like Croesus, who despite his infinite wealth had nothing to show for it.

Deep down, we know that time costs nothing yet has infinite value.

And as I play my saxophone one of things I ponder is how casually I've spent so much of it.

But the lament is not exclusively a sadness, it's also a call to action. For if a good life is a one richly lived, there's time enough to do much more - time to focus on what's possible, rather than what's not or might have been.  Time to rethink priorities.

Time even, to start writing again.
Posted by The bike shed at 9:17 PM 10 comments: