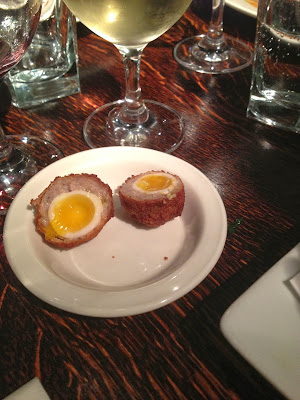 By way of what began as a joke, I've started to collect photographs of scotch eggs.

These are not any scotch eggs mind you - only ones I've eaten .

It began in a London pub where they serve a rather posh version with runny yolks - we couldn't figure how it was done, and hence the first photo.  Some of my colleagues thought this was amusing, and before I knew it, we were messaging each other with photos of fancy eggs. 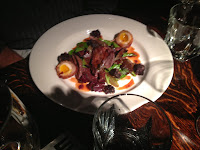 The designer aspect isn't as jumped up as it sounds.  Far from having humble origins, the scotch egg was invented by Fortnum and Mason in the eighteenth century, as a handy snack for coach travellers. The term 'scotch' evidently, has nothing to do with tartan and lochs - but refers to the idea that the egg had been added to - or  'scotched'. Today, there is even a company specialising in handmade versions, with forty recipes to chose from.

I'd like to think this collection is still an ironic joke - but I find myself ordering and getting the camera out at every opportunity.  Spurred on by a sense of competition, I'm on an bit of a mission to collect another ten by Christmas.

Should I succeed in this pointless exercise, it would, as they say, take the biscuit.

Or should that be the pickle?
Posted by The bike shed at 3:00 AM